During the rule of Emperor Akbar in the15th century AD, Agra earned fame all over the world as one of the great and beautiful cities of medieval India. It is a part of Braj Bhumi, the land associated with the birth and legendary activities of Lord Krishna and is famous as the home to the Taj Mahal and many beautiful heritage sites such Fatehpur Sikri and Agra Fort.

There’s more to Agra than just the fabled Taj Mahal. The city is a virtual gateway to a world of discovery… a freeze-frame from a resplendent era that’s been long gone. Agra is also known for its fabulous handicrafts, made of marble and soft stone inlay work. The Mughals were great patrons of arts and crafts. Empress Nurjahan took personal interest and was an accomplished artist herself in zari embroidery work. Agra’s major handicraft products, besides inlay work, are leather ware, brassware, carpets, jewellery and embroidery work. Agra is also well known for its sweets ‘Petha’ and ‘Gazak’ and the salty snack ‘Dalmoth.’ The best time to visit will be during the pleasanter months from November to mid-March, rich with the promise of cool, fresh mornings and evenings and dry, sunny days.

Taj Mahal  The magnificent Taj Mahal is the ultimate requiem of love, from a great Mughal Emperor to his beloved. So overwhelming is the exquisite beauty and presence of this marble mausoleum that centuries later today, even the very land where it has been located – Agra – has been immortalised as the City of the Taj. This iconic monument overlooks the holy waters of the Yamuna River. 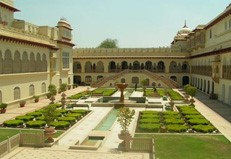 Agra Fort The construction of the Agra fort was started around 1565 when the initial structures were built by the Mughal Emperor Akbar. Shahjahan replaced most of these with his own marble creations. Some however survived, among them are —the Delhi Gate, Amar Singh Gate, Akbari Mahal and the Jahangiri Mahal. The fort is crescent- shaped— flattened on the east with a long, nearly straight wall facing the river. It has a total perimeter of 2.4 km, and is ringed by double castellated ramparts of red sandstone, punctuated at regular intervals by bastions. A deep moat surrounds the outer wall.

Chini Ka Rauza Built in 1635 the mausoleum of Shahjahan’s prime minister and Persian poet Afzal Khan Aalmi entitled “Maula Shukrullah, Shirazi” exhibits a fine use of glazed tiles. It is an excellent curtain raiser to an exotic Persian art style, which found itself a home in Agra.

Taj Nature Walk A beautiful natural forest cover spread over 70 hectares of area can be found 500 mtrs away from the eastern gate of the Taj. You can get excellent views of the Taj from different elevations in the park. Flora and fauna of different species are found here.

Samadh of Soamiji Maharaj This structure, going back over 100 years, is a tribute to the founder of the Radha Swami faith. Devout followers believe that service purifies the soul. At Soamibagh their services bears fruit in an edifice as spectacular as the Taj. Built in white and coloured marble, it has continued to be decorated ever since it came up over 100 years ago with stone and gems.

Ram Bagh One of the earliest Mughal gardens, the Ram Bagh is believed to have been laid out by Mughal Emperor Babur, founder of Mughal dynasty. It is said that Babur was temporarily buried here before his remains were taken to Kabul in Afghanistan. 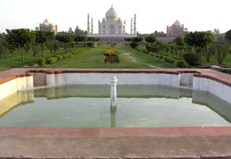 Mehtab Bagh Mehtab Bagh is located on the left bank of River Yamuna, opposite the Taj Mahal. The garden complex is a huge squaremeasuring approximately 300m X 300m and in straight alignment with the Taj Mahal. The excavation has revealed a huge octagonal tank on the southern periphery, baradaris (pavilions) on the east and west and a small octagonal tank at the center and a gateway at the northern wall.

Itimad-ud-daula’s Tomb (Baby Taj) This exquisite marble tomb was built by Emperor Jahangir’s queen, Nurjahan , in the memory of her father Mirza Ghias Beg during 1622-1628 CE. Built entirely in white marble and inlaid with semi-precious stones this mausoleum, which nestles by the banks of the Yamuna River, exhibits a strong Persian influence.

GETTING THERE
Agra airport functions seasonally. The city has several railheads with services connecting it to Delhi, Jaipur, Kolkata and Mumbai.