Udhagamandalam (Ooty)
The capital of Nilgiri district, is popularly known as the “Queen of hill stations’ a

mong the tourist circuits. It is situated at a distance of 105 km away from Coimbatore. The height of the hills in the Nilgiri range varies between 2280 and 2290 meters, the highest peak being Doddabetta at a height of 2623 meters. 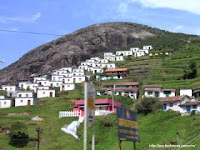 tta range, at an altitude of 1,858 metres above the sea level. It is the second largest hill station in the Nilgiris. Coonoor is located 19-km away from Ooty, a famous hill station of India. Coonoor is the first of the three hill stations in the Nilgiris- Ooty, Kotagiri and Coonoor – that one comes across when leaving behind the southern plains. Grassy meadows, tea bushes and profusion of Sunflowers, Marigolds and Rhododendrons, all growing wild cover it. Coonoor is essentially a small tea garden town where the weather remains pleasantly cool throughout the year. The town is physically divided into upper and lower Coonoor.

Kotagiri
Kotagiri is located 16-km away from Ooty and it is the oldest hill station of the Nilgiris. Kotagiri is situated at an altitude of 1950m, which was once a British hill resort, that dates back to 1819 and is quieter than Ooty. Elk Falls, Kodanad Viewpoint and Catherine Falls are a few places to visit.

Ketty
Ketty is famous for having the highest railway station in the country, situated at a height of 7,000 ft, in the Nilgiri Mountains of South India. The weather of Ketty valley is salubrious. Ketty is a wealth of natural beauty reposing in the Wenlock Downs, the Municipal Gardens and Doddabetta Peak, at 2,623 m the highest in the Nilgiris.