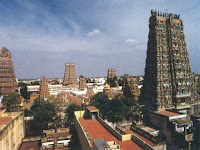 Madurai is one of the oldest cities of southern India. It has been a centre of learning and pilgrimage, for centuries. Legend has it, that the divine nectar falling from Lord Shiva’s locks, gave the city its name – Madhurapuri, now known as Madurai.

History
Madurai’s history dates back to over 2000 years ago, when it was the capital of the Pandyan kings. In the 10th century AD, the Chola emperors captured Madurai. It remained in their hands, until the Pandyans regained their independence in the 12th century, only to lose it to the Muslim invaders under Malik Kafur, a general in the service of the Delhi Sultanate. The Hindu Vijaynagar kings of Hampi overthrew Malik Kafur?s dynasty. After the fall of Vijayanagar, in 1565, the Nayaks ruled Madurai until 1781 AD.

During the rule of the Nayaks, the bulk of the Meenakshi temple was built, the main attraction for visitors, today. Madurai also became the cultural centre of the Tamil people. Madurai passed on to the East India Company in 1781, and in 1840, the Company razed the fort, which had previously surrounded the city, and filled in the moat. Four streets, the Veli streets, which were constructed on top of the fill, till today, define the limits of the old city.

Unique Attraction of Madurai
Shree Meenakshi Sundareswarar Temple
Every day, the Meenakshi Temple attracts pilgrims in thousands, from all over India. The temple is named after the daughter of a Pandyan king who, according to legend, was born with three breasts. At the time of the birth, the king was told that the extra breast would disappear, when she met the man she was supposed to marry, and this happened when she met Lord Shiva on Mount Kailas. Shiva arrived in Madurai, later, in the form of Lord Sundereswara, and married her. The Meenakshi temple is an excellent example of Dravidian architecture, with gopurams or multi pillared halls, covered from top to bottom, in a profusion of multicoloured images of gods, goddesses, animals and mythical figures. The temple occupies an area of around six hectares, and has four entrances to it. The museum called the Temple Art Gallery is located within the temple and contains beautiful stone and brass images, examples of South Indian scripts, friezes and attempts to explain the Hindu pantheon and many other legends associated with it.

Azhagar Koil
Located 21-km northwest of Madurai is a Vishnu temple located on a picturesque wooded hill. Here Lord Vishnu presides as Meenakshi’s brother ‘Azhagar’. It is one of the few temples in the country built in tiers. The tower consists of 3 tiers depicting Lord Vishnu in 3 postures, sitting, standing and reclining. The shadow of the Vimanam never falls on the ground. On entering the temple, one can see the life-size sculptures carved in the stone Mandapam built by Tirumalai Naicken. These are similar to those found in Madurai temple. The deity is known as “Kalazhagar” as he is the household deity of the Kallas, a low caste people. Other Attractions
About a kilometre away from the temple is the Tirumalai Nayak Palace, which was built in 1636, by the ruler, after whom it has been named. Much of the palace has now fallen into ruins, and only the entrance gate, main hall and dance hall remain. Gandhi Museum provides some of the little – known facts about Mahatma Gandhi. It has the blood – stained dhoti worn by Mahatma Gandhi, at the time of his assassination. Mariamman Teppakkulam Tank, few kilometres east of the old city, is the site for Teppam Festival (Float Festival) in the months of January and February.