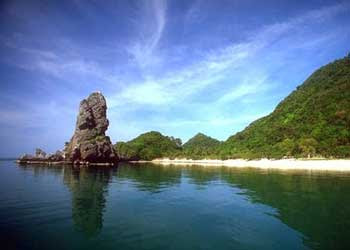 District of Andaman is Northern Part of Andaman & Nicobar Islands and comprises of 550 Islands, Islets and rocks out of which only 26 are inhabited. Some of these islands are large such as Middle Andaman, North Andaman, South Andaman, Baratang and Little Andaman islands. The northern most islands is Landfall and southern most Little Andaman. The total area of Andaman District is 6,408 Sq.Kms. The highest point of the territory is also situated in this District at Diglipur. There are four primitive tribes in Andaman District and they have been recognized as belonging to the Negrito stock, namely Great Andamanese, Onges, Jarawas and Sentinelese. Floating in splendid isolation, east of the Indian mainland is the archipelago of 572 emerald islands, islets and rocks known as Andaman and Nicobar Islands. This Union Territory is stretched over an area of more than 800 kms. From north to south with 36 inhabited islands. Once a hill range extending from Burma (Myanmar) to exotic flowers and birds. The topography of the islands is hilly and abounds in evergreen forests. The sandy beaches on the edge of meandering coastline are fringed with coconut-palms that sway to the rhythm of the sea. The sea around the islands offers excellent scope for water sports. The rare flora and fauna, underwater marine life and corals, with crystal clear water and mangrove-lined creeks, offer a dream-view of the rare gifts of nature. The clean and wide roads, free of filth as well as unpolluted fresh air attract any nature-lover, who seek absolute peace and tranquility in the lap of mother nature. Adventure tourism like trekking, island camping, snorkeling, scuba diving etc., are the real attractions. A visit to these islands is a memorable lifetime experience. Mythologically, the name Andaman was presumed to be derived from Hanuman, who was known to the Malays as Handuman. Since pre-historic times, these islands were the home of aboriginal tribes. The tribes of the Andaman group of islands are the Great Andamanese, Onges, Jarawas, and Sentinalese, all of Negrito origin, while the tribes of Nicobars are the Nicobarese and Shompens, both of Mongoloid stock. The first settlement by the British took place in 1789, which was later abandoned in 1796. The second settlement was basically a penal settlement, taken up in 1858, after the First War of Independence, followed by the settlement of convicts, Moplas, some criminal tribes from Central and United Provinces, refugees from erstwhile East Pakistan, Burma and Sri Lanka as well as ex-servicemen. In these islands people of all faiths-Hindus, Muslims, Christians, Sikhs etc., and of all languages like Hindi, Bengali, Tamil, Telugu, Punjabi, Nicobari etc., live together in complete peace and harmony. Inter-religion and inter-regional marriages are common. This amazing racial and cultural mix is correctly described as Mini-India. Forests are the green gold of the islands. The reserved and protected forests extend over 86% area of the territory and the forest cover is more than 92% About 50% of the forests has been set aside as Tribal Reserves, National Parks and Wildlife Sanctuaries, which are inviolate. Luxuriant mangroves, perhaps one of the riches in the world, occupy nearly 11.5% of the territory. More than 150 plant and animal species are endemic in nature. Mahatma Gandhi Marine National Park is rich in corals, varieties of coloured fishes, sea turtles etc., besides other marine life. It is a bird’s paradise – more than 271 varieties of birds inhabit the idyllic landscape, out of which 39 are endemic. Megapode, Swiflet, Hornbill and Nicobar, Pigeon are some of the specialties of the Andaman and Nicobar Islands.