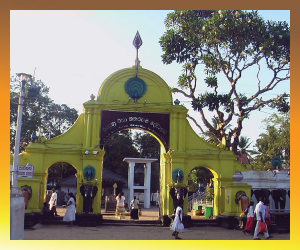 Kataragama temple in Kataragama, Sri Lanka, is a Hindu and Buddhist temple complex dedicated to Skanda-Murukan also known as Kataragamadevio. It is one of the few religious sites in Sri Lanka that is venerated by the majority Sinhala Buddhists, minority Hindu Tamils, Muslims and the indigenous Vedda people. It is a collection of modest shrines, of which the one dedicated to Skanda-Murukan also known as Kataragamadevio is the most important.
For most of the past millennia, it was a jungle shrine very difficult to access, but currently is accessible by an all-weather road. Almost all the shrines— and the nearby Kiri Vehera— are managed by Buddhists, apart from shrines dedicated to Tevayani, Shiva (Siva) and the Muslim mosque. Up until the 1940s a majority of the pilgrims were Tamil Hindus from Sri Lanka and South India, who undertook an arduous pilgrimage on foot. Since then most pilgrims tend to be Sinhala Buddhists, and cult of Kataragamadevio has become the most popular amongst the Sinhalese people. Protests occurred upon this development in the 1940s, particularly when restrictions were placed on Tamil worship at the shrine.

Arrive in Sri Lanka. You will be met by representatives and transferred to Kandy. After breakfast proceed to Kandy.
Lunch at Senani Restaurant. En route visit a *Spice Garden in Matale to see the different spices, which Sri Lanka is famous for. You will be introduced to different spices and shown how some of these spices are grown and processed.
On arrival city tour of Kandy, including Upper Lake Drive, Market Square, Arts & Crafts Centre, Gem Museum. *Kandy ‐ the hill capital, venue of the annual Perahera. The last stronghold of the Sinhala Kings was finally ceded to the British in 1815. Kandy is an example of the Buddhism’s influence in Sri Lanka today. Temple’s shrines and monasteries keeping alive Buddhist traditions are everywhere.
Visit *Temple of the Sacred Tooth Relic ‐ ever since 4th Century A.D, when the Buddha’s Tooth was brought to Sri Lanka hidden from sacrilegious hands in an Orissan princess’ hair, the Relic has grown in repute and holiness in Sri Lanka and throughout the Buddhist world. It is considered Sri Lanka’s most prized possession.
Witness a cultural show featuring various dance groups of Sri Lanka
Overnight stay at Hotel Topaz, Kandy – 3*

After breakfast proceed to Nuwara Eliya. Lunch at Blue Field Restaurant
En route visit Tea Plantation & Tea Factory
*Tea Factory & *Tea Plantation ‐ Tea was first planted in Sri Lanka in 1824 at the Botanical Gardens at Peradeniya, when a few plants were brought from China. More were introduced from Assam in 1839. In 1867 a Scottish Planter named James Taylor planted tea seedlings on an 8 hectares of forest land, in the Loolcondura Estate
*Nuwara Eliya ‐ The ‘Little England’ of Sri Lanka, is set against beautiful backdrops of Mountains, Valleys, Waterfalls and Tea Plantations. It is supposed to be one of the coolest places in the Island, but it is really just like an English spring day, although the temperature does drop at night. All around Nuwara Eliya you will see evidence of the British influence, houses like country cottages or Queen Ann style mansions. Visit *Seetha Eliya Kovil – 7kms on the Nuwara Eliya ‐ Bandarawela road, bordering the Hakkgala Strict Nature Reserve is the area called Seetha Eliya, where a quaint little devala is found by the side of the road at a slightly lower elevation by a stream.
Transferred to Hotel
Overnight stay at Jetwing St Andrew’s Hotel, Nuwara Eliya – DLX Colonial

After breakfast proceed to Kataragama.
Evening attend the ‘Pooja Ceremony’.
*Kataragama ‐ Kataragama is a place of worship not only for Hindus, but for Buddhists, Muslims and some Christians as well. Kataragama Devala is situated by the Menik Ganga (river). Still, the major part of devotees who actively participate in the Kataragama Festival are Hindus, as the proceeding honour Skanda (also known as Murugan), the deity of Kataragama.
Transferred to Hotel
Overnight stay at Priyankara Hotel, Kataragama

After breakfast proceed to Beruwela.
En route visit *Galle ‐ Sri Lanka’s most historically interesting town is Galle. It was a major port until about 100 years, but today still handles shipping and sailing boats in the natural harbour. Stroll around the lighthouse and harbour or visit the old town where you can see the traditional lace makers and wood carvers and purchase some the finest souvenirs.
*The Dutch Fort ‐ The South Coast’s major city is Galle, whose oldest landmark is the massive Portuguese and Dutch Fort which is a “World Heritage Site” in which the central city is contained. But the city may be much older. Some scholars believe it to be the “Tarshish” of the Old Testament, to which King Solomon sent his merchant vessels, and to which Jonah fled from the Lord.
Continue & relax.
Overnight stay at Jetwing Tropical Villa, Beruwela

After breakfast proceed to Colombo.
In Colombo commence city tour *Colombo ‐ a drive through the city taking you to the busy commercial areas as well as the tree‐lined residential, Cinnamon Gardens. Visit Fort, the former British administrative center and military garrison, Sea Street ‐ the Goldsmith’s quarters in the heart of Pettah, the Bazaar area, where is also a Hindu Temple with elaborate stone carvings, and the Dutch Church of Wolfendhal dating back to 1749. Also visit the BMICH, see the replica of Avukana Buddha & the Independence Square.
*Shopping in Colombo…….visit *ODEL Unlimited provides ample opportunity indulge, not only in shopping for designer wear apparel for the whole family, but also take taste buds on a voyage of discovery.
Transferred to Hotel
Overnight stay at Pegasus Reef Hotel, Colombo – 4*

Packed breakfast transferred to the airport for the flight back