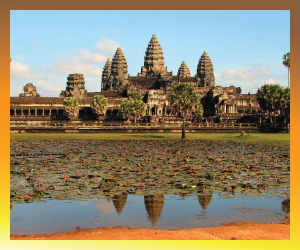 Angkor Wat (or Angkor Vat), a World Heritage Site, is a temple at Angkor, Cambodia, built for King Suryavarman II in the early 12th century as his state temple and capital city. As the best-preserved temple at the site, it is the only one to have remained a significant religious centre since its foundation—first Hindu, dedicated to Vishnu, then Buddhist.
The temple is the epitome of the high classical style of Khmer architecture. It has become a symbol of Cambodia, appearing on its national flag, and it is the country’s prime attraction for visitors.

REMARK: The above prices are quoted in US dollar per person based on Twin room shared. Single supplementary is a surcharge if any people require saying alone in a single room.